Period pain is cramping pain in the lower abdomen during menstruation. Up to 40% of women suffer from menstrual cramps while the intensity varies. Period pain as well the premenstrual syndrome (PMS) are the most common unpleasant side effects of menses and often come with further symptoms like nausea, back pain or mood swings.

Some women don’t feel any discomfort when they are bleeding, while others suffer from very painful periods, which are unbearable without any painkillers. Period pain (dysmenorrhoea) can be very uncomfortable and sometimes is accompanied by various other symptoms.

Usually, period pain is medically not worrisome. However, in some circumstances, it may be caused by an abdominal illness. There are 2 types: Primary and secondary period pain. Primary period pain starts with the first monthly discharge during puberty and is normally not an indicator for an illness. Secondary period pain, also called „acquired dysmenorrhoea“, starts at a later stage in life and is very often caused by a gynecological illness like endometriosis.

What Are the Symptoms of Period Pain?

It is safe to say that many women don’t feel comfortable when their period starts. Women who are not affected by the possible discomforting side effects of menstruation can count themselves really lucky.

Typical pains during the time of the month are abdominal aches, but symptoms like back pain, nausea, diarrhoea, fatigue, sensitive nipples, huffiness, mood swings and headaches or migraines are also quite common.2 The symptoms are pretty similar to those of PMS, but they usually appear at an earlier phase of the cycle.

Common menstrual pain is cramping pain in the lower abdomen. It is usually described as a dull or pulling ache, while the intensity of pain gets stronger and weaker in waves. Some women have to put up with such aggravating ache that they are unable to work.3

When Does Period Pain Occur?

The cramping starts right before or on the first day you started bleeding, while the first or second day is usually the most painful. On the third day, the stomachache is normally fading and it is gone by the last day of the monthly bleeding until the start of the next cycle.4

Sometimes it happens that, during the female cycle, no ovulation takes place, thus preventing progesterone from being formed while the uterine lining does not build up and thicken. Cycles without ovulation lead to weak menstrual bleeding as well as weakened symptoms in general.5 Discomfort during that time of the month may also vary depending on your lifestyle and diet or your mental condition. Further below, you will find tips on how to prevent period pain.

What Are the Causes of Period Pain?

Painful periods are due to so-called prostaglandins, which are naturally produced pain transmitters. They are released from the uterus once the bleeding starts. At the same time, the endometrium is rejected while the estrogen as well as progesterone levels drop after ovulation, provided that the ovules were not fertilized.6

Prostaglandins cause the muscular wall of the womb to contract while the supply of the uterus with blood is reduced. This leads to period pain. Pain transmitters can not only affect the uterus but also other parts of the body thus causing nausea, vomiting or diarrhea.4

Mental factors may also be relevant regarding the occurrence and intensity of menstrual discomfort. For example, some women subconsciously do not accept becoming a woman or womanhood itself.6

If you are interested in getting to know your cycle better and would like to understand the side effects of menstruation, the fertility monitor cyclotest myWay can be your perfect companion. The clever device identifies your fertile days on the basis of your basal body temperature and therefore represents a hormone-free contraception method.

Secondary dysmenorrhoea is often caused by gynecological illnesses, like endometriosis, corpus polyps or an intrauterine device (IUD), when they appear later in life. The most common diagnosis in such cases is endometriosis. In the beginning, the twinging and cramping when suffering from secondary dysmenorrhoea occurs only during menses, but later the ache usually persists throughout the entire cycle.

Abdominal aching can also be triggered by psychosomatic factors, e.g. if a woman has been exposed to sexual violence. The unfulfilled wish for a child can also be the cause. Women then feel disappointed when the bleeding begins because they are not pregnant. This disappointment can provoke mental as well as physical symptoms.1

Who is Suffering from Period Pain?

Period pain is the most common gynaeological disorder. About 30 to 40% of women have to put up with primary period pain, although the intensity of the ache varies. Especially young women are affected. After having given birth for the first time, the pain very often lessens, in some cases also with increasing age.7

Permanent stress as well as physical and excessive strain may also lead to period pain. In some cases, the irritation means a reduction of life quality. Furthermore, this is often the reason why girls and women are absent from school, college or work. In 10 out of 100 women, the pain is so unbearable that they are not able to cope with their daily routine.8

Secondary period pain usually appears with increasing age as it is generally caused by illnesses.9

How to Relieve Period Pain?

Unfortunately, there is no universal therapy to fight period pain. However, you don’t have to accept the discomforting side effects of menstruation without taking any action. In order to relieve the pain during menses, you can take some very helpful precautionary measures. There is also a variety of methods and options that provide a quick relief.

How to Prevent Period Pain?

The intensity of the pain can not only be reduced by taking medication but also by your lifestyle. However, it is important to take precautionary measures on a permanent basis and not only occasionally.2

Endurance Sport like running, cycling or swimming can prevent painful periods and backache. Exercising is good for your health and increases your pain threshold.10

A healthy diet has a positive effect on period pain and helps to prevent discomfort at that time of the month. Make sure that your diet includes all important nutrients. A diet based on alkaline foods, which is meant to have a detoxifying effect on your body, supposedly helps to put your hormones in balance, thus reducing unpleasant symptoms during the “monthlies”.11

Stress can worsen painful periods. If you tend to be stressed, you should look for ways to reduce your stress level, e.g. through relaxation techniques, meditation or special stress workshops.

Different herbs and food supplements can help against painful periods on a long-term basis. They might even prevent the aching from occurring or at least decrease it. Chaste tree and black cohosh in form of capsules can have a positive effect as they are able to balance your hormones. Taking magnesium as well as vitamin B6 can also reduce the aching. They can be taken in form of a nutritional supplement.3

Herbal teas can also have a preventive effect. You should start drinking tea daily a few days before the start of your next monthly discharge. Herbs that are recommended according to traditional herbal medicine are yarrow, lady’s mantle, majoram, marigold, silverweed, mugwort, melissa, chamomile, willow bark and oregano. The consumption of parsley is also said to have a beneficial impact on painful periods, as it promotes the blood circulation.2

Schuessler Salts are homoeopathically processed mineral salts. There are no side effects when taking them and they are meant to have a positive effect on numerous illnesses. The Schuessler salt Magnesium phosphoricum is suitable when affected by period pain. It is generally used for cramps and pain.12 Other salts that are recommendable are Ferrum phosphoricum, Kalium chloratum, Natrium sulfuricum, Silicia und Calcium sulfuricum.13

The monthly cycle is very complex. Which treatment is best to fight acute pain and agony varies from woman to woman. You will have to learn by trial and error in order to find out what measures and/or medication is best suitable to reduce the discomfort.

There are different techniques which have proven to be helpful against belly and back pain during menses. However, it is important that they are gentle techniques, which don’t overstrain you, e.g. yoga, progressive muscle relaxation according to Jacobsen or autogenic training. Painful periods can sometimes be minimized by carrying out such techniques, backache very often disappears, too. The general rule is that if you exercise and try to be relaxed in life, it is less likely that you suffer from abdominal twinges.15

You should try and see what works best for you. Getting rest, relaxing baths and sufficient sleep are also beneficial when in pain.

There are no scientific studies on this, but some women have reported that they noticed pain relief after having switched from using tampons or sanitary pads to menstrual cups. Using a menstrual cup might take some time to get used to if you don’t have any experience with it. But it sure is worth a try.

If none of it helps, taking pills with ibuprofen, paracetamol, ASA or naproxen helps to ease the abdominal twinges. There are also combination drugs with antispasmodic effects which include paracetamol. Should you suffer from nausea during “that time”, you should use suppositories instead of pills.17

Intense Period Pain: When to see a doctor?

If you suffer from severe period pain which increases in intensity and disturbs your daily routine, you should go and see a gynaecologist in order to be able to exclude a possible illness like endometriosis. Another reason for the belly to cramp can be an IUD. Get your gynaecologist to check whether the pain could be caused by an IUD and have it removed if necessary.18

If you never used to suffer from discomfort during your period but suddenly feel pain during your period, it is advisable to get a doctor’s appointment. This also applies if you don’t have painful periods but during the rest of the cycle as well. In both cases it is likely that the pain is due to a gynaeological illness or another disorder which needs to be treated. A diagnosis through a gynaecologist is important in order to exclude a possible illness like endometriosis.3

A detailed anamnesis as well as a gynaeological check-up is very important. Depending on what is the most likely reason for the abdominal pain, an ultrasound, a hysteroscopy (an examination of vagina and womb with a fibro-optic telescope) or a abdominoscopy can shed light on the dark. Mental factors should also be kept in mind.19

Pain in the lower abdomen can also be caused by factors which are not related to menstruation and are therefore not considered period pain. For example, in the early stages of a pregnancy belly pain might occur. In some cases they lead to an abortion or they might be an indicator for a tubal pregnancy. If abdominal aches are troubling you even though you are not on your period, please check if the twinging could be a sign of a pregnancy.

Abdominal twinging sometimes appears after birth. They could then be an indicator for endometritis, a pelvic inflammatory disease (fallopian tubes and ovaries are infected with bacteria) or a thrombosis of the ovarian veins. Fibroids (leiomyomas) or ovarian tumours could also be the cause and illnesses like appendicitis, cystitis or kidney stones.20 If you get stomachache but don’t have your monthly bleeding, you better consult a specialist. 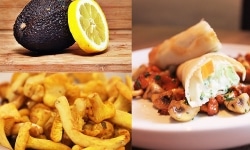 Healthy and Yummy Meals Before Your Period